Vikendi (Codename: Dihorotok) is the 4th playable map that is in the works for BATTLEGROUNDS, Vikendi is a 6x6 island on the Adriatic Sea.

Development on this map began sometime in 2017,[1] map was teased on June 10th, 2018 in the 'Microsoft E3 2018 conference' video.[2] PUBG Corp attended the The Game Awards (2018) and had a World Premier CGI trailer of Vikendi, later that night Vikendi became playable on the Test Server client, and later that month, on December 19th, Vikendi became available on the live client on PC. Vikendi was released on January 22nd for Xbox One and PS4.

An isolated Northern resort island in the shadow of Mount Kreznic, Vikendi was home to a wide variety of attractions, businesses and villages. Vikendi is enveloped in dense/thick forest and another aspect of the island is its warm Mediterranean coastline and snowy mountains in the central area of the map [3] [4]. Tourists can look to the future from the Cosomodrome, travel back to the past and walk with the giants at the prehistoric Dino Park, visit the aging Castle or even take a tour of the winery. Vikendi is as beautiful as it is dangerous and Survivors treading these bitter cold lands will have to watch their backs even more closely, as the fresh snow is perfect for leaving behind footprints! With snow and the footprints that you leave behind or other players leave behind, the hunter becomes the hunted. The days are long on Vikendi, but it won’t be long before the sun sets and the auroras fill the moonlit skies.

The map is inspired by Slovenia to create the visual design of the map [5].

At the beginning of Season 6, we announced that Vikendi was going on a little vacation while we debuted Karakin. Since then, we've given some of Vikendi's landmarks a revamp, modifying terrain, towns, weather, updating Dinopark, and adding new trains that travel around the map! We want to hear what you think about the changes and also collect your feedback early while we apply the final coats of paint to our icy Battleground, so we're giving you the opportunity to playtest the new map early with help from our official PUBG Partners! [6]

We love a good Sniper's Duel. With that in mind we've done a clean up of Vikendi to make it more appealing to the Long Gun Hunters in our midst. More vehicles will be appearing on the map to help you lead foot it through the winter wastes, but be on the lookout for Spike Traps in those snow covered hills or the landslide will bring you down.

Vikendi is a map based on an isolated Northern resort island on the Adriatic Sea.

Vikendi being on the Adriatic Sea is contradicted by the fact that the entire coastline of the Adriatic Sea reaches a yearly minimum temperature of ~12 °C, way too far from the snow limit of 0 °C. The Slovenian and italian northern coast is also warm and mountainless, with the mountains rising deeper inland. A much more feasible place for an island like this would be the North Sea, the Baltic Sea, or the Barents Sea in spring or fall. 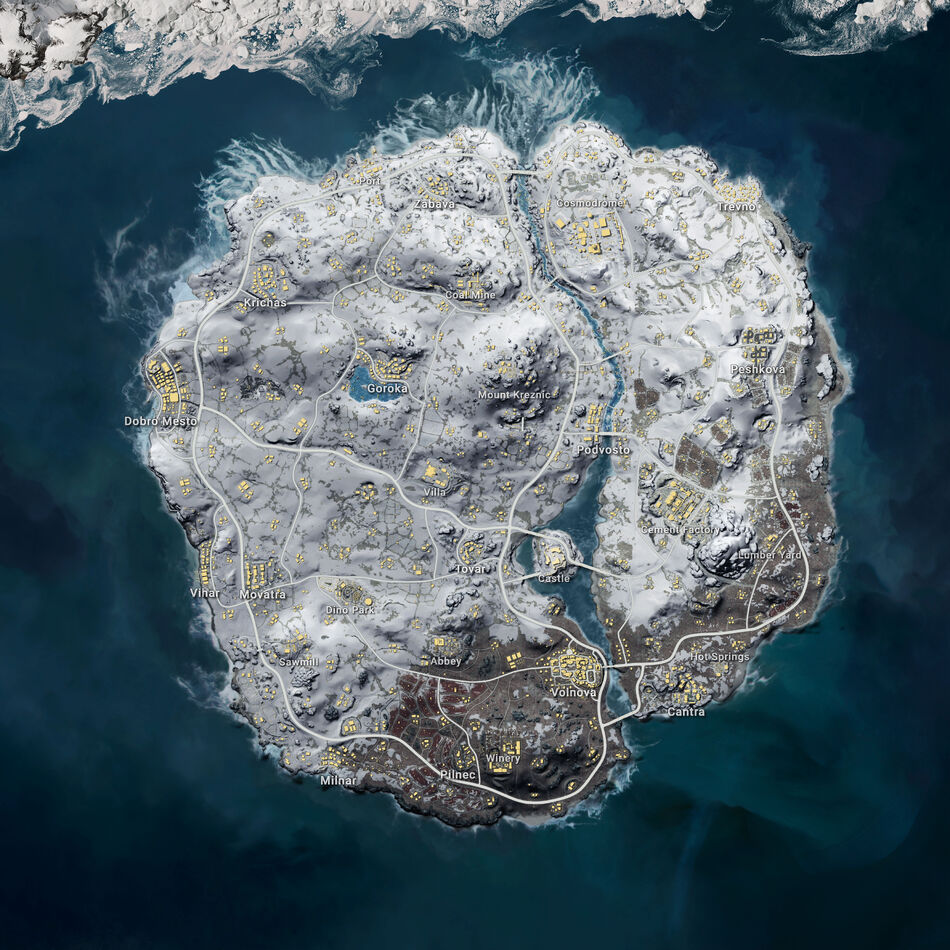 Map Vikendi has this type of weather;