The UAZ is an off-road vehicle featured in BATTLEGROUNDS. The UAZ was first shown during the Vehicles dev log and has been in the game since the Alpha build stages.

The UAZ was used by Soviet, Warsaw Pact armed forces, as well as paramilitary units in Eastern Bloc countries. In the Soviet Union, it also saw widespread service in state organizations that needed a robust and durable off-road vehicle. Standard military versions included seating for seven personnel. The UAZ presented two great advantages: it was able to drive in virtually any terrain and it was very easy to repair.

The UAZ is a reliable four wheel drive vehicle boasting excellent off-road capability. With a top speed of 115 km/h on level roads, the UAZ is surprisingly stable when cornering at high speeds and unlikely to roll over unless driving with reckless abandon or when steering across very steep slopes. The engine is rather noisy however and can alert enemies, as the ignition sound alone can be heard up to 125 meters away. Fuel consumption when at full throttle is quite high, owing to its design being catered to military demands - fuel efficiency not being one of them.

As with other vehicles, gas cans can be used while stationary to refuel, and a horn can be used to get the attention of teammates or anyone else within earshot of the horn. Cruising speed on a level surface tops out at around 103 km/h, however the engine can be boosted for a maximum speed of 116 km/h at the cost of increased fuel consumption. Like most other vehicles, the tires are vulnerable to gunfire and if destroyed, will reduce speed and handling performance. 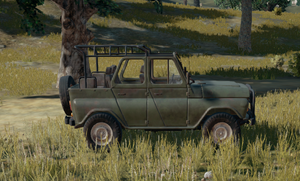 Of all the UAZ variants, the open top UAZ provides the least amount of protection to its occupants, therefore care must be taken when driving near buildings or other potential ambush points. 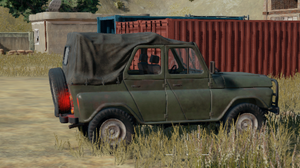 The soft top UAZ features a cloth material that covers the roof and rear cargo area. This variant of the UAZ is arguably the best one to use, as the cloth top stops all bullets and covers more area than the hard top. 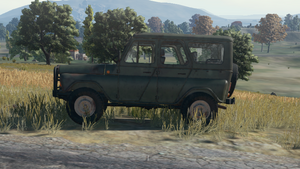 Providing substantially more protection than the open top variant, the hard top UAZ features a metal roof, decreasing the chance of a stray bullet making it into the passenger cabin. 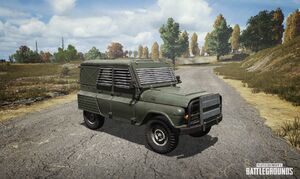 Only obtainable by shooting a flare gun while outside of the current safe zone, the armored UAZ provides the most protection of any of the UAZ variants. A heavily uparmored hard top UAZ, it features uparmored doors and side panels along with reinforced framing and baffles over the windows and windshield that give the appearance of a tougher vehicle while preventing the occupants from shooting out. Despite the extra armor, persons inside may still be shot at if a bullet manages to go between the baffles on the windows, encouraging use of the vehicle as a weapon by simply running attackers over. This variant has 1,000 more HP than the other variants.