The Pickup is an off-road vehicle featured in BATTLEGROUNDS. Only appearing on Miramar, it takes the role of the UAZ.

The Pickup can be seen as Miramar's equivalent of the UAZ - both have closed and open topped variants, and both fulfil the same niche of being excellent off-road performers. Its high ground clearance and engine torque make it suitable for tackling Miramar's rough and bumpy desert terrain, being capable of hill starts even on fairly steep inclines, although its stopping distance leaves more to be desired. It also has a wide turning circle, even wider than the UAZ, making it a poor choice when navigating tight turns and corners. Compared to the UAZ, the slower acceleration, slightly lower top speed and poorer handling performance leave occupants more vulnerable to gunfire, especially since Miramar is much larger than Erangel.

As with other vehicles, gas cans can be used while stationary to refuel, and a horn can be used to get the attention of teammates or anyone else within earshot of the horn. Cruising speed on a level surface tops out at around 102 km/h, however the engine can be boosted for a maximum speed of 112 km/h at the cost of increased fuel consumption. 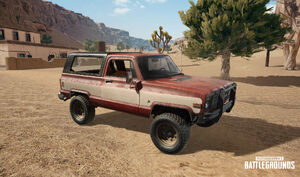 The closed top Pickup provides slightly more protection due to the roof and pillars blocking bullets, although the large open windows still leave the rear passengers more exposed to gunfire, although less than that of the open top Pickup. 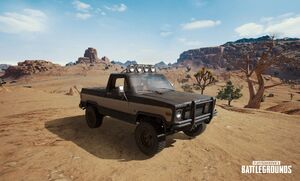 The lack of a roof for the cargo area means that passengers sitting behind the cabin will be highly vulnerable to gunfire from the rear and sides, therefore caution should be advised when driving near potential ambush points.