This week Jordi Rovira from Anticto talks with us about Mutable, the character customization middleware we are using in the game.

This post will talk about the character customization system in BATTLEGROUNDS. Characters are always a key element of any online game and also one of the most challenging systems for the artists and developers. These are some the requirements we had when designing the system for BATTLEGROUNDS:

Character quality must by high; Character variation must be high. Part of it happens in the player screen, and part of it happens in game, when the player equips items; Characters have to render very efficiently because the game frame-rate must always be high; Characters have to use as little resources as possible, because we want many of them; The system must be able to grow with the game after release. To implement the system in Unreal Engine we used Mutable, a middleware for character customization that we have developed at Anticto during the past few years using our experience in other online games. The middleware has been used in some small games, but nothing as challenging as BATTLEGROUNDS so we had work ahead!

We created a new tool inside the Unreal Engine editor so that artists could use diagrams to define the structure of characters in the game. This is how it looks like for a very basic naked body of a character. 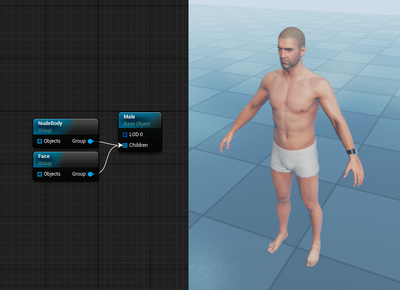 The artists can create as many character parameters as they like. Some of them will be directly controlled by players when creating their own avatar, and others will get controlled by the game, based on player equipment.

The parameters can be connected to different effects, like color effects to change the skin. These effects include most of Photoshop-like image layer effects, several 3D mesh composition, morphing, etc. The good point is that artists can add any number of these effects without programming intervention.

The character can have any number of accessories and these can be created in separate diagrams inside the editor, for scalability. These accessories can range from clothing, to hair styles. Each accessory can offer its own variations for further customization

All the accessories are finally combined in the game ready character in real-time. 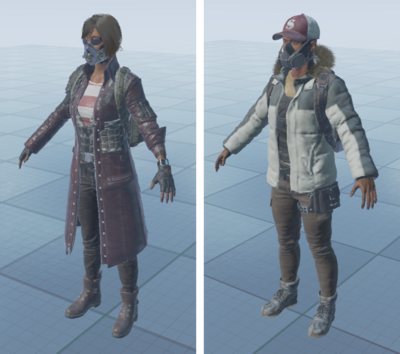 This combination is not always trivial, since some character items interact with other. For instance if you wear a hat, you don’t want your cool hair sticking out of it. The system provides the artists with some tools to control this:

Additionally some fine detail modification is needed depending on the layering of the accessories:

Overall, the system provides many building blocks, and it is up to the artist to decide how to use them to achieve different effects. We are working to provide more effects soon, so that the options for players grow in each game update.

One of the coolest effects we are developing are the projectors. These will let players apply tattoos to different body parts, or even logos on clothing accessories.

Keep an eye on your character options after every update to find what is available! j.